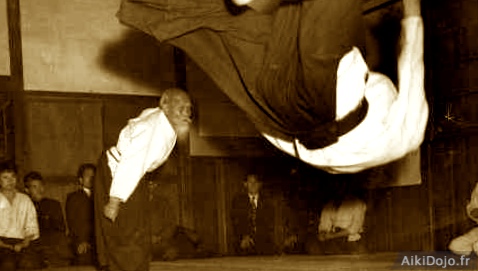 (FR) La version française est disponible ici.
(IT) La versione italiana è disponibile ici.
Many thanks to Blair HALL for his kind work for translating this article in English.

During his workshops and seminars, Daniel TOUTAIN Sensei refers to 6 fundamental points in Aikido (these points are illustrated in his 14 DVD).
Here, we extend that list to 10 key points. Each point should be considered of equal importance.

Anyone practicing Aikido needs to assimilate these basic principles in order to apply them during the execution of Aikido techniques.

Keep in mind that the principles are interrelated: to correctly apply one, it will be necessary to apply others. By reviewing the principles several times you will appreciate this for yourself.

The ten fundamental points are…

The better they are assimilated, the more one comes to understand that these points are no more than the application of common sense principles. Nevertheless, to learn them, it is absolutely necessary to follow the advice of a competent instructor… and to practice regularly. Nothing will be gained and thoroughly assimilated without sustained effort.

Point 1 -Master the “hanmi” position and unbalance the opponent

A correct hanmi stance is characteristic of Aikido. SAITO Morihiro Sensei always said that the founder was very particular about this point.

Good hanmi allows the hips to be placed correctly (without tension in the body), which leads to correct positioning of the whole body…

There are several types of hanmi (Ken no hanmi, Jo no hanmi, Hitoemi). Hanmi is a necessary prerequisite when starting to learn techniques. It must also be used when actually executing techniques.

…to be stable and unbalance the adversary

The notions of hanmi and balance are inseparable. Good hanmi gives the stability needed to unbalance an adversary. This is particularly true when practicing in kihon (static training) but it is often neglected when practicing in ki-no-nagare (fluid training). No mater how big your opponent is, he can be controlled if you take their balance. 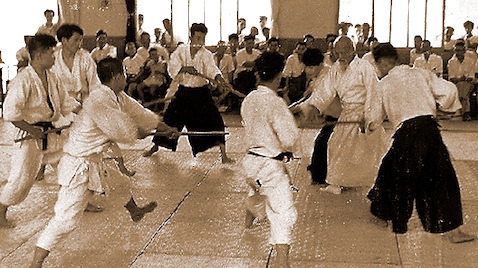 Hanmi allows movements in any direction and hence makes
it possible to respond to attacks from anywhere.

Kokyu is a difficult notion to understand and assimilate. It is nevertheless essential to every technique. To use kokyu is to exploit the support of the ground and to convey this through the body. It requires correct positioning of the whole body … too relaxed and the body looses strength; too tense and the body becomes rigid, easy to unbalance, and incapable of effectively transmitting the forces involved. There is a striking similarity here with meditation, where the body should be neither too tense nor too relaxed.

It is equally important to exploit one’s breathing: a calm and powerful exhalation is indistinguishable from good kokyu (see also the point below about kiai).

Harmony in space, time and strength…

« Awase« signifies “adaptation” and “synchronisation”. It is important on several levels during the execution of techniques…

A movement should be carried out with effectively the same timing as the opponent. Awase cannot be achieved if one reacts too soon, or too late.

At the same time, the strength and kokyu applied in a technique must be adapted to that of one’s partner(s) / adversary (ies).  The more firmly you are held, the more relaxed you should be; and vice-versa. 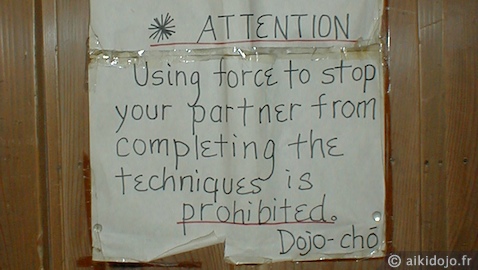 In the Iwama Dojo, it was forbidden to block a technique using strength. This is because each Aikido technique applies to a particular type of attack. A different technique would be used if the situation changes. Aikido has a sufficient range of techniques to respond to all types of situation.

Awase also involves the harmonisation of one’s gaze… to correctly direct kokyu, one’s gaze should be aligned appropriately with respect to an adversary.

Point 4 -Use circular and spiral movements

Circles and spirals are present in all Aikido techniques. A curved movement is the best way of moving in awase with an adversary. To allow energy to circulate, and to use the ground support, curved lines are essential. This is the physical principle that, for example, allows the spine to support much greater pressures than it could if it were straight. 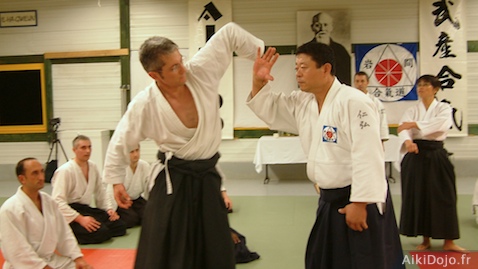 During his classes, SAITO Hitohira Sensei often
traces spirals to illustrate this principle.

The principle of a lever can be used to minimise the effort required to move an object. The founder of Aikido knew how to exploit this law of physics is his ingenious art.

Daniel TOUTAIN Sensei likes to joke about this, saying that he appreciates the way that Aikido obtains a maximum of effect for a minimum of effort. 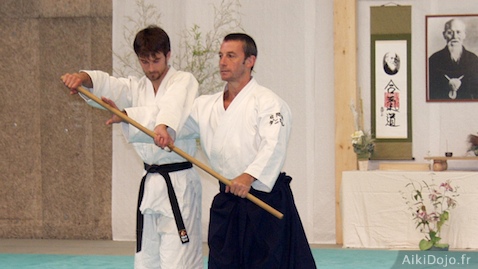 The principle of the lever is very apparent in bukidori, but
it is present in all Aikido techniques.

The founder said that atemi (strikes with the foot or fist) counted for 99% in Aikido.

Atemi provoke a reaction from an adversary but they also ensure that a technique is performed at the correct distance. In many cases, the incorrect positioning that renders techniques completely useless could be avoided if proper attention were given to atemi.

The notion of atemi must be kept in mind at all times … regardless of role: whether reacting to an attack or initiating one.  All too often, an attacker comes too close, forgetting that he is practicing a budo, and exposing himself to an atemi…

An atemi is necessary to
perform sankyo omote well. 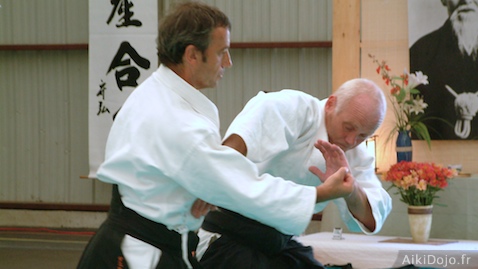 Correctly placed in time and in the form of a movement, atemi contribute to the execution of techniques with the whole body.

Kiai are an integral part of traditional martial arts, of which Aikido is no exception.

Kiai is an expression of the very essence of Budo.
SAITO H. Sensei

Kiai are, however, rarely practiced in dojos, mainly because the Americans, who occupied Japan after the war, prohibited martial arts training. The use of kiai would have drawn attention to contempt for such rules.  On the other hand, martial arts practitioners in the countryside were much more at ease, which was one of the reasons that led UESHIBA O’Sensei to settle in Iwama.

In all films with recorded sound, you can hear the founder uttering strong kiai. At Iwama, his kiai were well-known to the villagers and greatly contributed to the fear that he inspired in them. 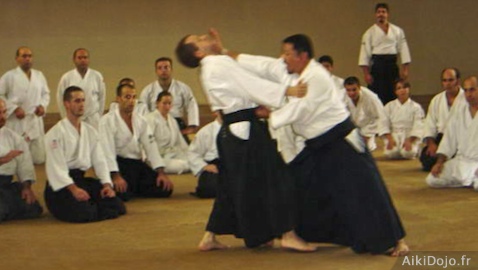 Kokyu will be all the more powerful when
it is accompanied by a good kiai.

SAITO Morihiro Sensei insisted that when practicing Taijutsu (unarmed techniques) one should think of Bukiwaza (weapons techniques), and the contrary. Weapons techniques and unarmed techniques are merely different aspects of the same thing. The genius of the founder was to identify the fundamental points in common and to apply them to all situations of conflict. The more one advances in training, the more apparent this becomes. 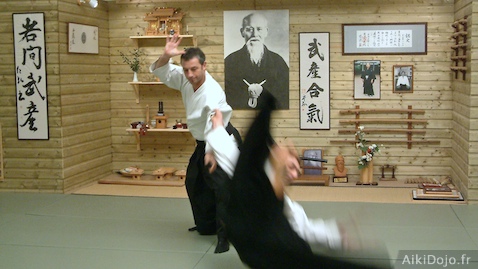 Multiple adversaries should be seized as a whole, like a single adversary, while against just one attacker, movements suitable for multiple adversaries are appropriate.
The best way to avoid opposing the force of an attack (that is to say, to move in awase) is to imagine that several attackers are to be dealt with at the same time.

This principle permits effective extrication, moving away from lines of attack and correct positioning with respect to one’s opponents. 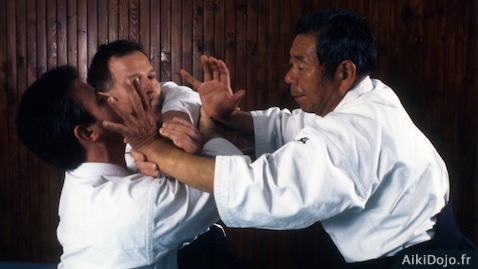 In this technique « ninin dori », it is clear that
two adversaries become one.

Moreover, to be effective, techniques have to be performed with the whole body, not simply the arms. An aikidoka must use the whole body. Each part: the arms, hips, feet …, needs to work together when performing a technique. Before learning to “move in awase with an adversary”, one must learn to “move in awase with the parts of one’s own body”… suburi practice is there for that purpose.

Last, but by no means least, a budo spirit should be maintained during training.  SAITO Hitohira Sensei explains that each technique should be performed as if it were a question of life or death. For example, during suburi training it is important to visualise an imaginary adversary for each of the suburi. 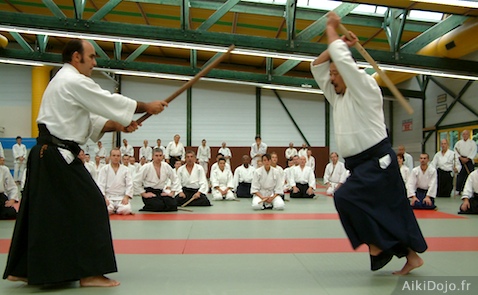 In France, we have a saying « mettre du cœur à l’ouvrage » (litt. “practice with the heart”), which means to work with energy and enthusiasm. To have the budo spirit is to « mettre du cœur à l’ouvrage » during training, it also means to remain aware that, at any moment, the intention of an adversary may change and hence the form of attack may change: one must remain vigilant.

Just as a painting expresses the feelings of the painter, a piece of music those of the musician, the techniques that we perform are an expression of who we are deep-down inside.